How did you discover the opportunity to volunteer at MedSpot ?

I had been thinking for days about how I could help in this war situation, and then I saw a BBC report with András Spányik and I thought I would apply. I had never volunteered as a doctor before, so I didn’t know what to expect. 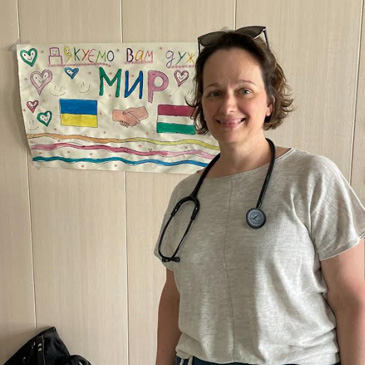 I was very nervous. I was used to the conditions, the equipment, the patient routes in the hospital, and obviously it was more comfortable. So I was a bit worried about what it would be like in camp conditions, where patients just keep coming in one after another and you have to improvise. In comparison, I immediately found that the Maltese Charity had everything well organised, which was very impressive. They had who to move where, who to treat and how, there was no uncertainty, everything was in place.

Did you have any cases that were memorable for some reason?

What I remember very much is the case of a woman injured by shrapnel. A woman in her 40s, from the Kyiv area. She had been hiding there for two weeks with the shrapnel wound in her leg. She was very lucky to have a surgeon who was able to treat her with antibiotics and bandages. Even so, it’s a bit of a hair-raising situation, especially as he travelled all the way to Hungary with that wound. We wanted to take him to the hospital in Nyíregyháza straight away, but she refused to go and asked to be allowed to go to his family in Germany. Thankfully, the wound was not very serious, so we treated him thoroughly and told her what to look out for. You don’t come across cases like this very often in normal practice! There was also a woman about 35 who came with her child. Her leg was doubled in size, clearly a huge blockage in a vein, a life threatening situation, especially as she was running away with it with no rest. She didn’t want to go to the hospital either, she was worried about her daughter. She hadn’t taken the blood thinner for two days because she was out of it, she had to run. She could go to Italy now and her bus left in 15 minutes. Luckily the MedSpot clinic was equipped, had just the right box of blood thinners, she got it, got a briefing from us and promised to go to the hospital the next day as soon as she could.

What is the most important experience you have had with us?

I was already in the team at the beginning of March, and at that time the country was in a very heightened state of mind, with the turbulent election campaign and of course the war situation. There was a feeling that you were just drifting along, that there was no possibility of making a difference, of making an impact. And so came this volunteering in Beregsurány, which was the complete opposite of that feeling! Everybody helps everybody, everybody knows their job. Suddenly everything became very positive.